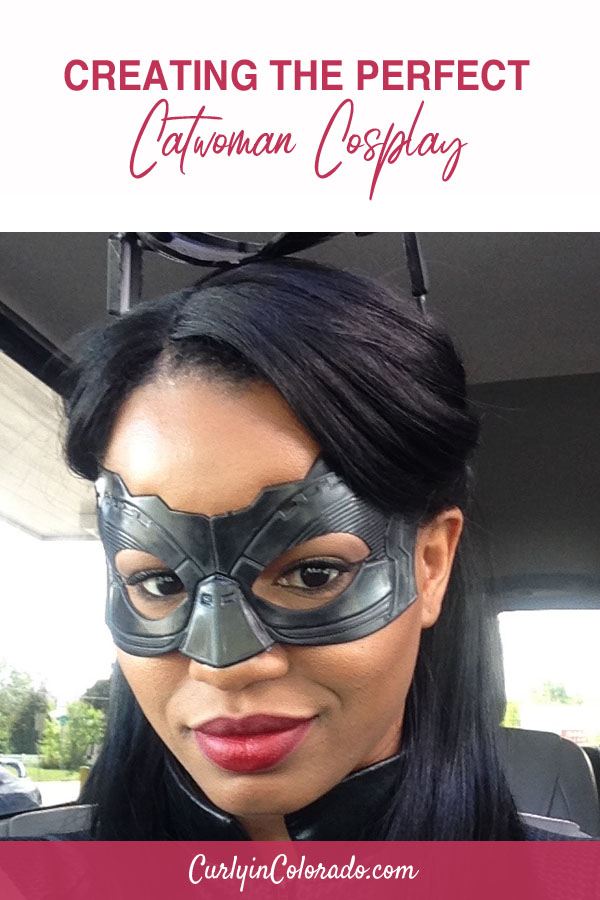 The act of dressing up like characters from any work of fiction is called cosplay.  The larger comic book conventions are known for having loads of attendees dressed in cosplay and the Denver Pop Culture Con is no exception.  They even have an annual costume contest and a special area for cosplayers to meet up and take photos.  Naturally, when the first comic book convention was announced in Denver, my first thought was to dress up as Catwoman; the Eartha Kitt version.  I quickly put together a costume on my own.  I learned very quickly though how hard it was to slay all day.

This post may contain affiliate links which means I will make a commission on any product you buy through those links at NO EXTRA cost to you.

For my makeup, I look for products that will last throughout the entire day without budging.  Say for instance, my eyeliner.  You can’t play Catwoman without a bangin’ cat eye winged liner right?  Maybelline makes a gel eyeliner that is so bomb for this.  I’ve tried other liners over the years and they just didn’t make it without smudging or flaking.  Of course, other companies make gel eyeliner but I love a good deal.  I usually grab this product at Walmart and call it good.  It even comes with a little brush to apply it with.

Another must have is a really good waterproof mascara.  I’m still on the fence which one I’ll go with this year but I do like Maybelline’s Full n’ Soft mascara.  It’s the only product I’ll wear on my bottom lashes because it stays put so well.  The key is to wear a waterproof mascara.  You can wear it for long periods of time because it doesn’t smudge and stays in place all day.  Both the liner and mascara can be removed with a good eye makeup remover.

For my foundation I like to go as matte as possible.  Iman cosmetics has a fabulous stick foundation that is the most matte I’ve ever seen.  If I’m experiencing any dryness though this product can be a little unforgiving.  For this reason I also like the Studio Fix Fluid by MAC.  This is another matte finish foundation that lasts a long time.  Only difference is, it’s a liquid so I can wear it even on my dry skin areas.

I can’t forget about primers!  Without them your makeup won’t hold up for very long.  My favorite eyeshadow primer is the Urban Decay Primer Potion.  I’ve tried other primers and this one is the best in my opinion.  Without it I’ll go from looking like Catwoman to a washed up raccoon by the end of the day.  This primer keeps all of that daring black eye makeup in place until it’s time to call it quits.

My face primer is the Ever-Matte Poreless Priming Perfector by Becca.  I only apply it to my oily areas so that my foundation will stay matte.  If I get a little dewy though, I just press a paper to get rid of shine and it goes back to matte again.

If you want to go for a bold red lip that lasts, make sure you apply a lip liner underneath your lipstick of choice.  This extends the wear and can adjust the color if your red is a shade or two lighter than you expected.

There have been so many different versions of the Catwoman character so each one has a different hairstyle.  To recreate Eartha Kitt’s hair, I slicked my own hair into a high bun using a denman brush.  Of course I used my eco gel to slick my edges down.  Then I used a sixties flip style ponytail extension and made a braided headband with some braiding hair.  I purchased both at a local beauty supply store.

When I cosplayed the version of Catwoman seen in the Hush Batman comic book, I picked up a short pixie wig.  For that style I had to cornrow my hair underneath so that it would lay flat.  I also wore a wig when I rocked the Dark Knight version of Catwoman.  In both cases I secured the wig down with black bobby pins so that the hair stayed in place all day.

Where to Buy Costumes?

As you can already guess, I’ve collected quite a few things while dressing up as Catwoman so many times.  The best place for hard to find costume items really is Amazon.  I was able to find a decent zip-up catsuit for about $25 USD which was a lot more comfortable than any full costume I have ever bought.  Of course I was nervous about the fit but it had a lot of stretch to it so I wasn’t worried that it would tear at the seams or anything like that.

Accessories like my catwoman goggles took only a quick search on Amazon.  Party City has a pretty good selection of full costumes and things like cat ears & gloves.  I purchased the Dark Knight version catwoman costume there but the material was a little on the thin side.  I felt more comfortable wearing some black leggings and a cami underneath.  Investing in a good piece of shape wear also helps to smooth things out under that catsuit if you know what I mean.  I like the flexees version but a good pair of shaping shorts will also do the trick.

For shoes I suggest something that you can walk in ALL day.  My first year at the convention I was in so much pain because I just had to wear those high heeled boots.  I still wear black boots but they are flats with comfy insoles.  You’ll also need a nice black tote bag for collecting all of your Comic Convention swag and to carry water.  I always take a large black tote with a couple of flip flops tucked in.

There are still tickets available for this fun event that only comes around once a year so check it out!  And If you’re at the Denver Pop Culture Con this weekend and spot a Black Catwoman with flip flops by the end of the day, stop by and say hi.